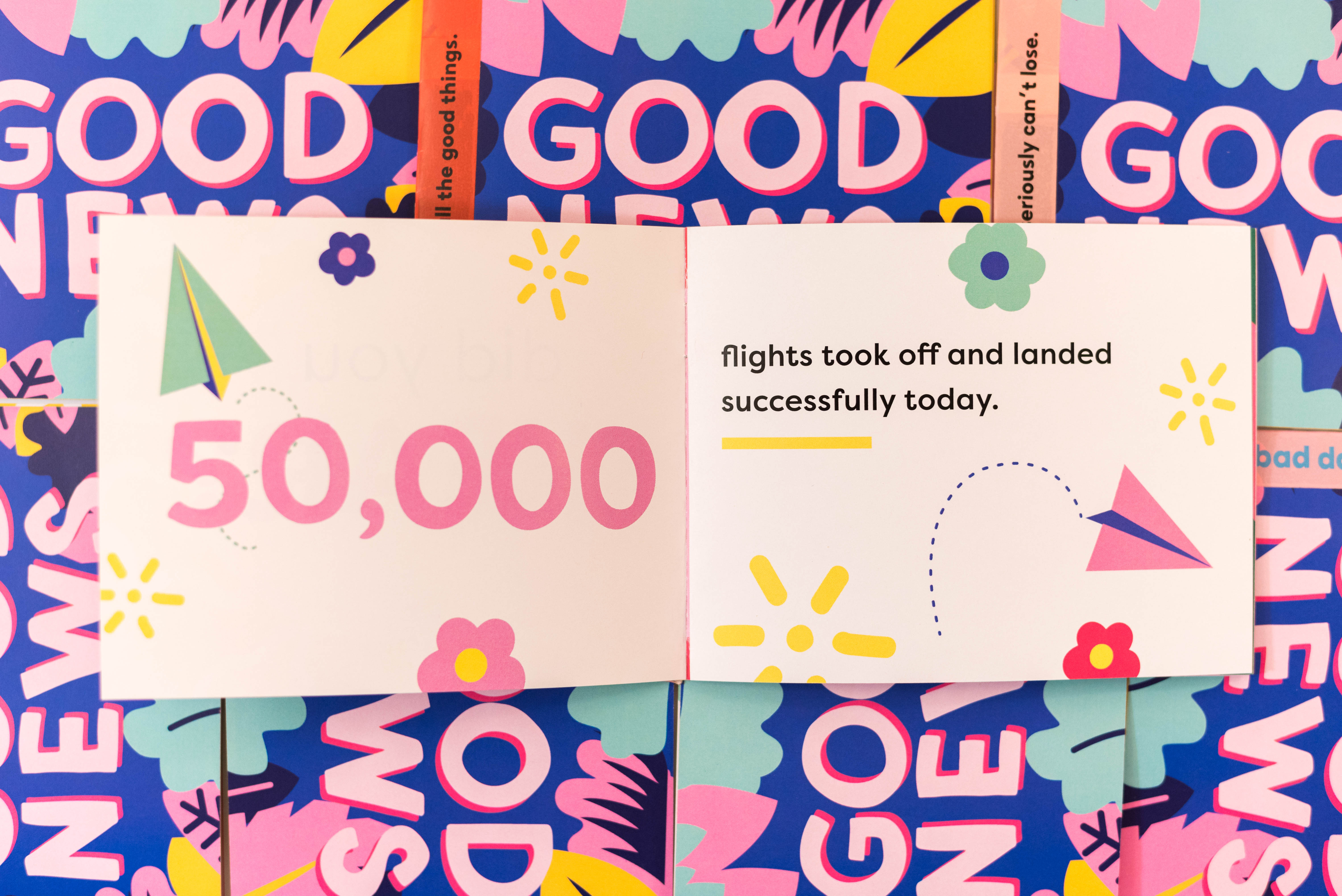 For the first project of the semester - we were asked to think about the cultural impact our art has when we put it into the world. Every design we make plays a role in the visual design of our current culture. I often don't think about the resonating aspects of my designs - especially since many of them are menial everyday tasks (like an email design people will open once and then let disappear into the oblivion of their inbox for the rest of eternity).

Our task was to create a 'zine, and that was pretty much it - other than that we had free reign over the content, size, materials and imagery. Initially I brainstormed a few themes for mine - I thought about making one with all of my unfinished short stories in them, an ode to fictional lives never lived, per se. I considered making one focusing one entirely on images of little moments of happiness that one might overlook on a daily basis. I did like the idea of something calming or being a visual break from all the heaviness and anxiety I personally feel on a daily basis, and think my peers feel as well. When creating my personal brand, something that I thought about when writing who I was and what I did was that I wanted to create things that delighted people - and that is something I hoped to achieve with this project.

So I landed on the concept of a 'zine about calming or anxiety relieving tidbits. This led me down a bit of a rabbit hole in terms of design direction, since I had a few concepts and they were all pretty different from one another. My original thoughts were something very soothing with feel good quotes and song lyrics that were uplifting - which led to some sketches and a more muted cover with soft pinks and blues: 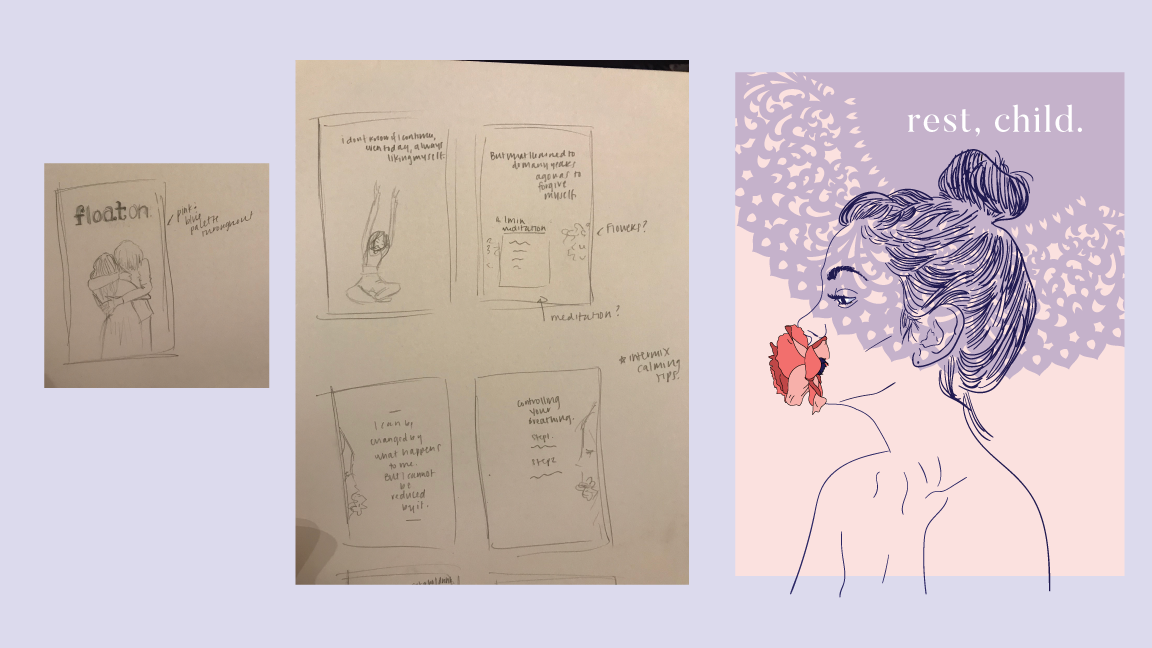 I also considered an approach that used photography and bright patterns. I focused a lot on flowers in these 2 concepts because I perceive flowers to be a symbol of beauty and purity and wanted that beauty to be portrayed in a way that indicated that our thoughts and words should be beautiful and we need to be mindful of them/be more loving towards others and ourselves. Here is a quick look at this second concept: 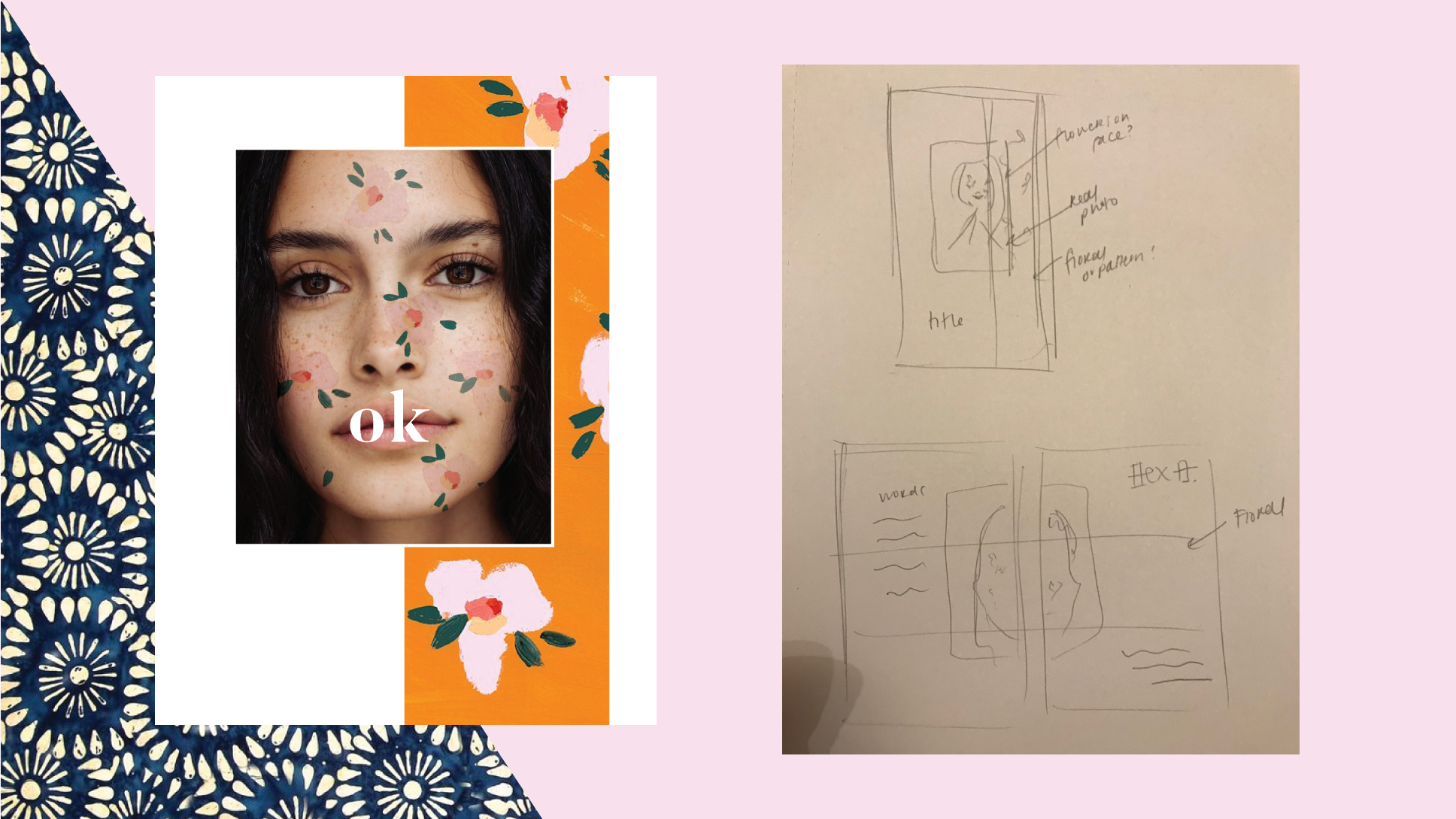 Finally - I returned to one of my favorite illustrators who really inspires me with her use of color combinations and style, Marylou Faure

She is based in London, and is a freelance designer and art director. Here are a few of her images: 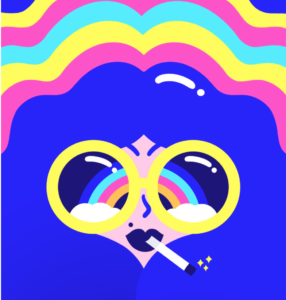 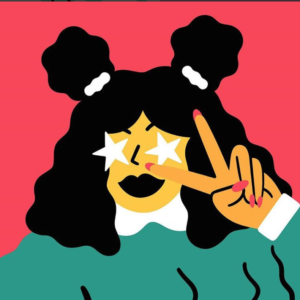 Her style really exudes joy and the color combinations stand out to me, which I thought would be great for a 'zine that you want to catch people's eyes. So I turned to her expertise to try something a little different from my original concept. I had asked family and friends for help with joyful or calming quotes - and my sister sent me this image: 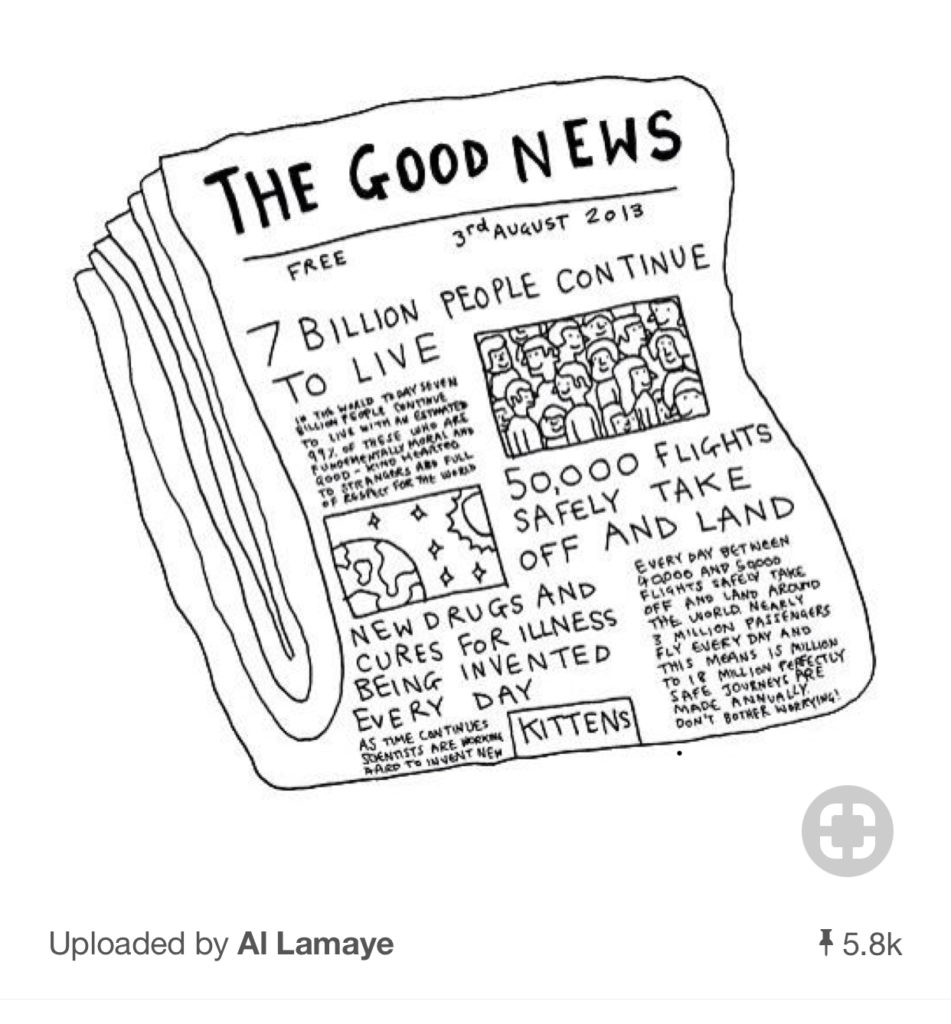 I really liked the content direction of this image - the simple facts were very comforting and I thought they could fit with Marylou's illustration style. So concept 3 was born out of the combination of those two inspirations: 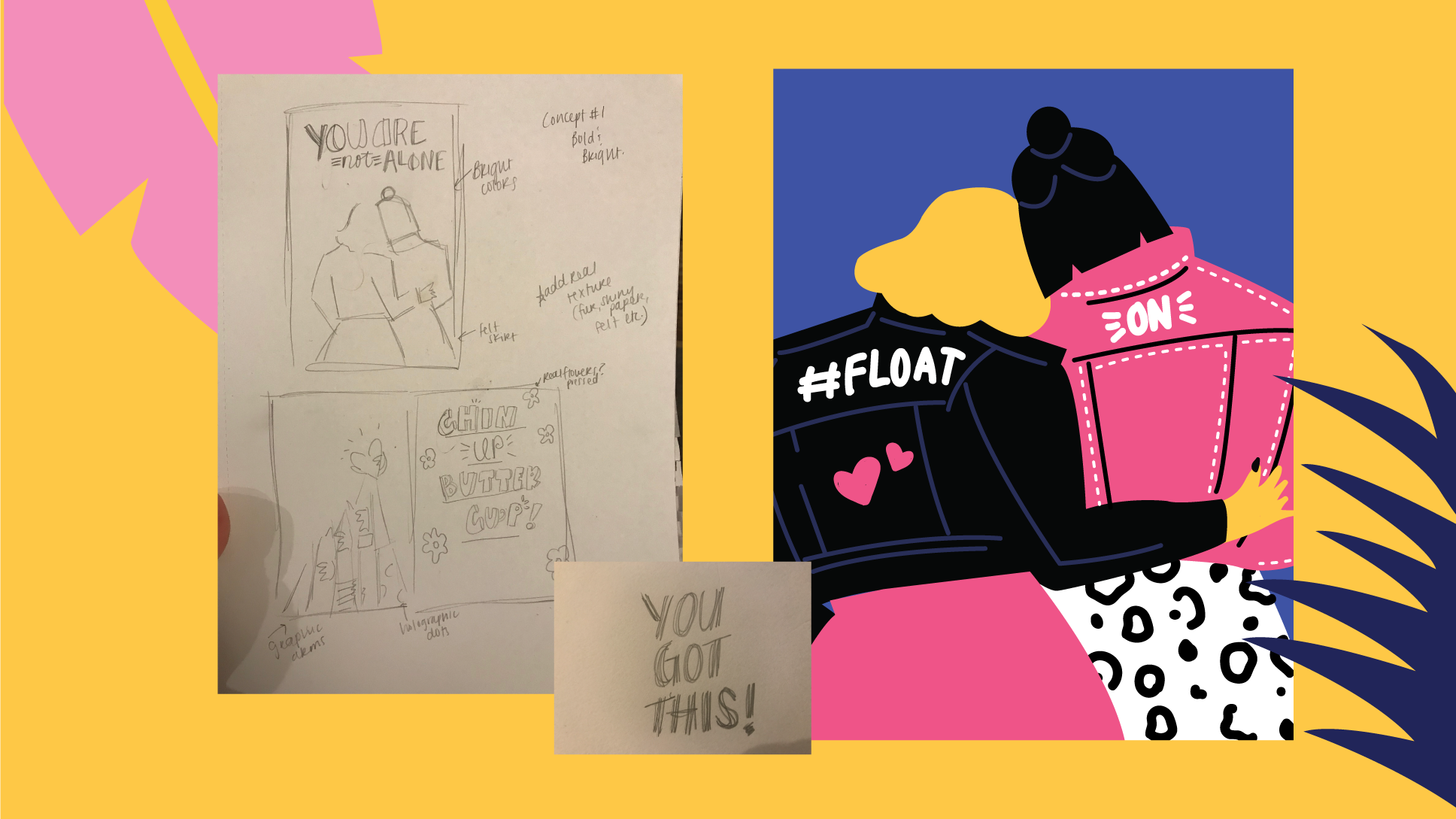 After feedback from the class - I went with option 3, which I think was my favorite all along as well. I really like doing the illustrative style from Concept 2, but I think that style would have created a more somber, thoughtful emotional response and I like the immediate joy concept 3 seems to bring about.

Here's where I was with my first round creating the 'zine: 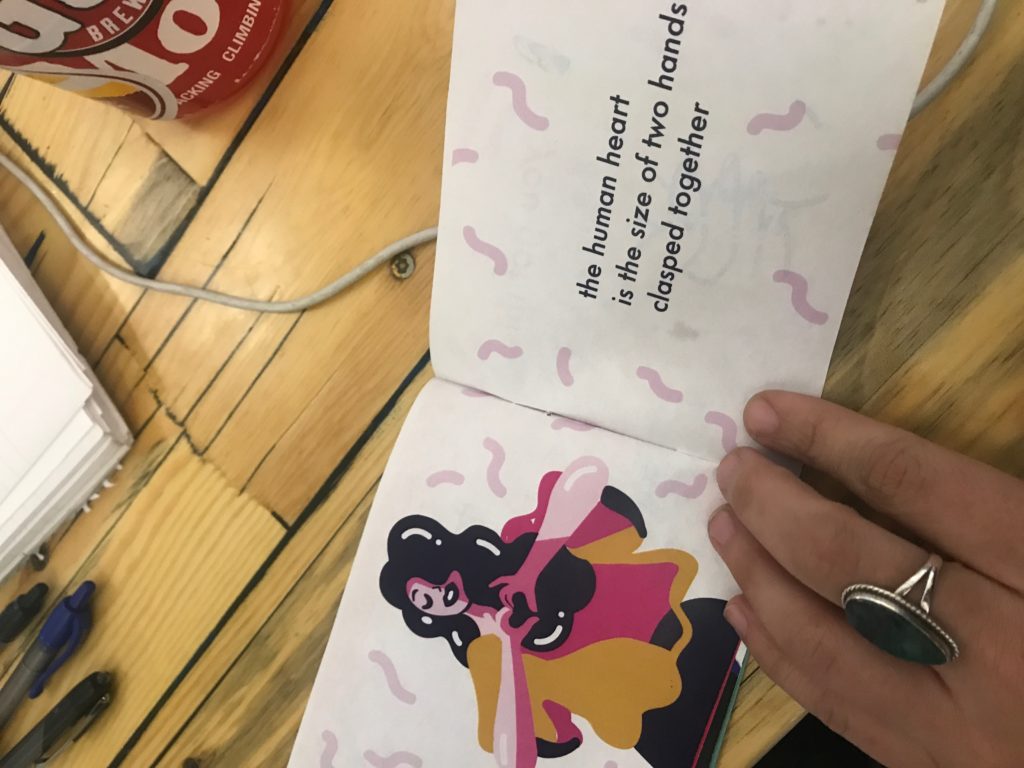 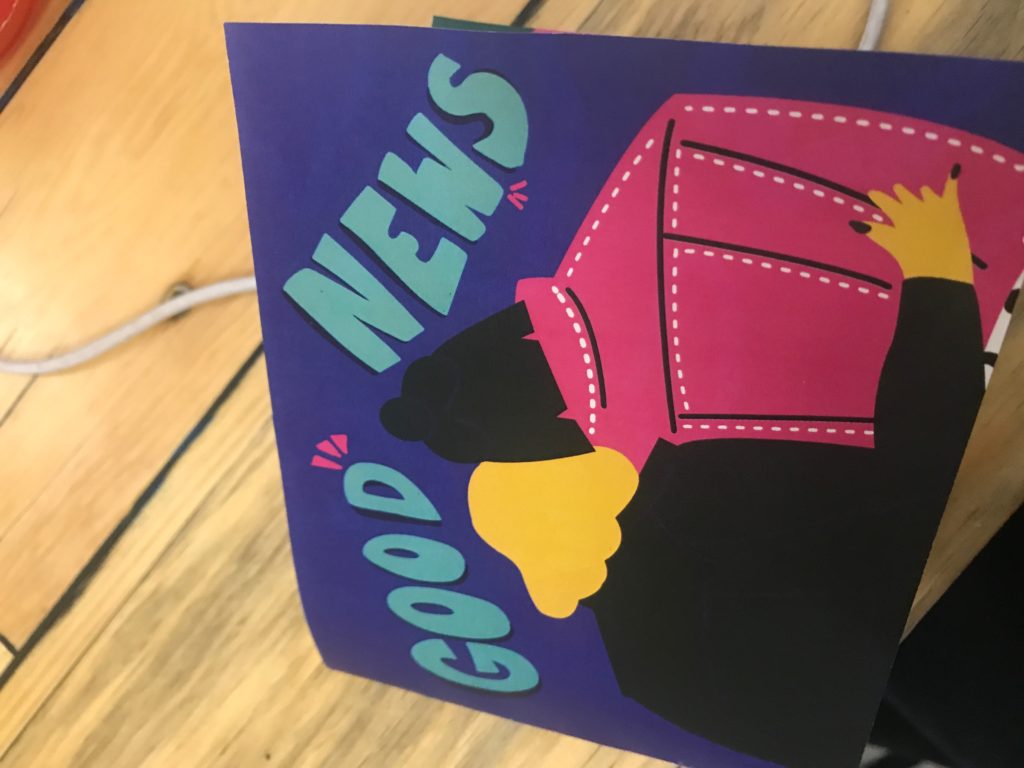 (sorry, these don't want to rotate in wordpress!)

The feedback I received from my first round was that the cover felt a little disconnected from the tone of the rest of the book. A few of the spreads needed some tweaks, and it was recommended I incorporate more hand written text into the 'zine.

I tried hand drawing the text freehand before realizing it just really wasn't as clean as I wanted it to be. So I traced over the font I was using on my computer screen (makeshift lightbox!) and then scanned in the images and drew over that text. A little clunky, but overall I felt like I was getting a much more consistent look for the type. I made a few small edits to spreads - for example I originally had a spread mentioning the ozone layer, which after discussing with my classmates was false information - so I had to revise that spread. I really liked the layout so I kept it the same, but I struggled to find a new fact for that page, and feel that that may be an area that still needs refining if I ever adjust the booklet in the future.

Here's a peak at the final: 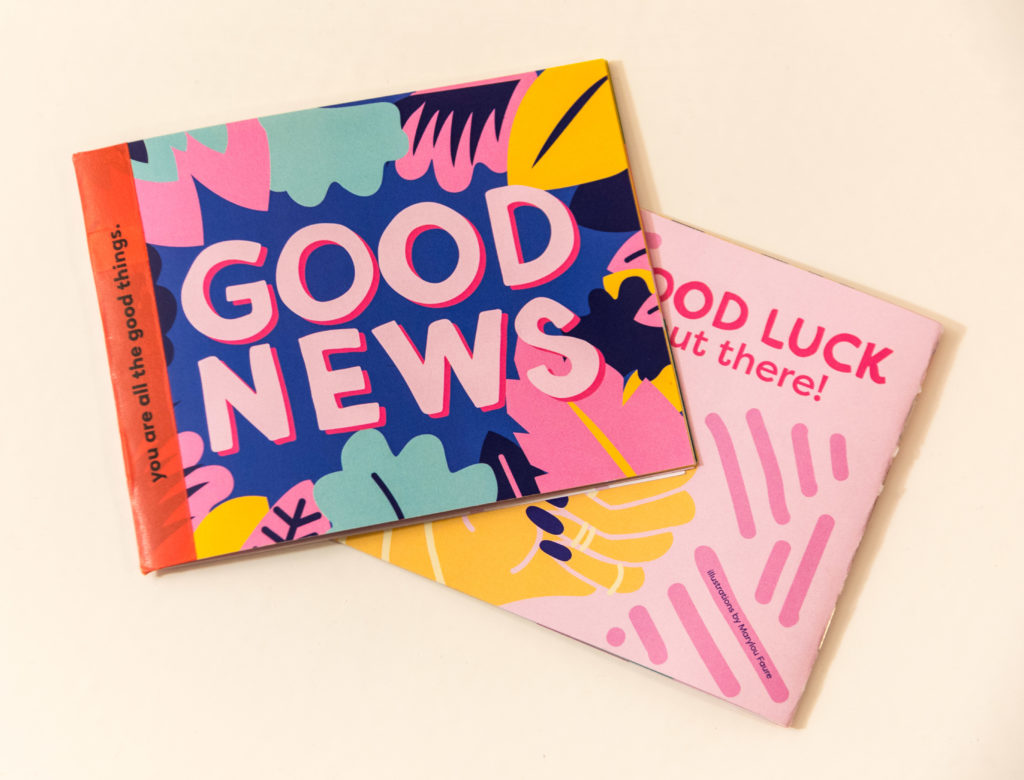 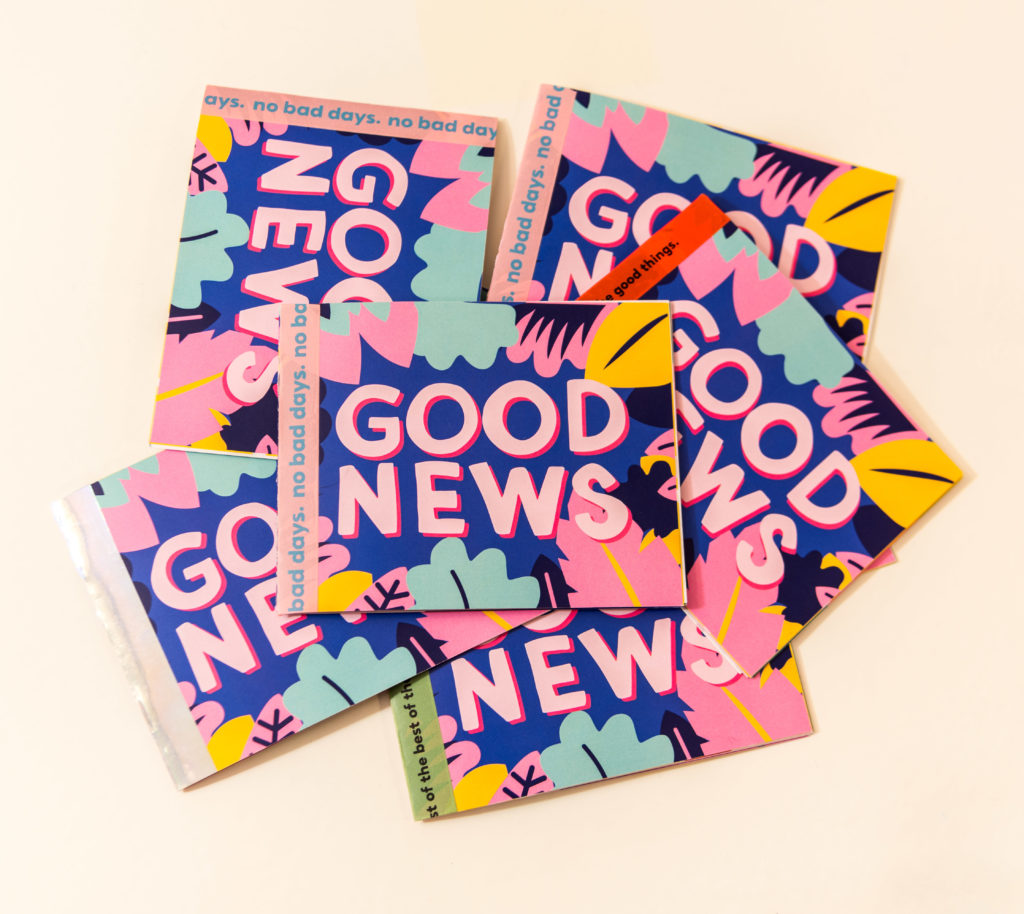 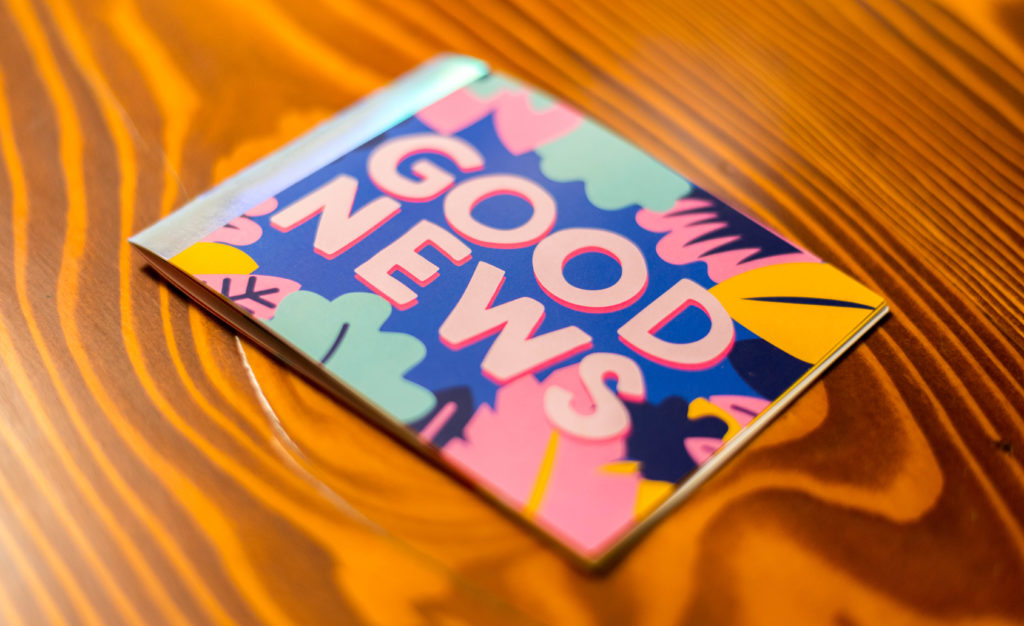 I had spotted some cute washi tape online a week earlier with some uplifting phrases - so I decided to line the prints with some tape to add a little extra to them: 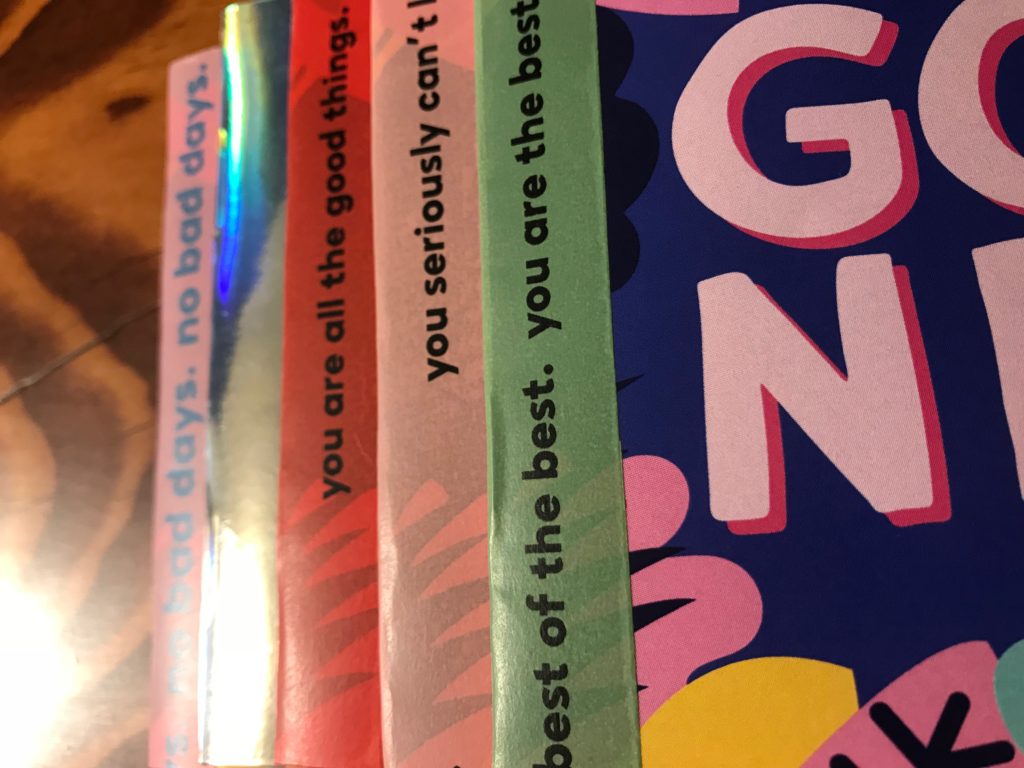 I'm not going to lie - I was dreading distribution a little. I'm not a very outgoing person so the idea of interrupting businesses or stopping strangers wasn't very exciting to me. I started with friends and family, and got pretty positive reactions from them. Here are a few quotes:

"This is the cutest thing ever in the whole world!!"

"I took it to happy hour with my coworkers and I showed them and they think it's adorable and that it should be in the back pocket of every airplane seat."

"Would for sure catch my eye and entice me to pick up and see what's inside."

"I wish I had a long version I could keep as one of my coffee table books!"

"The only page that threw me a little is the bird spread...it isn't quite as a congruent with the story that the other pages are telling."

Here's a photo of me leaving some randomly for coworkers to find on their desks: 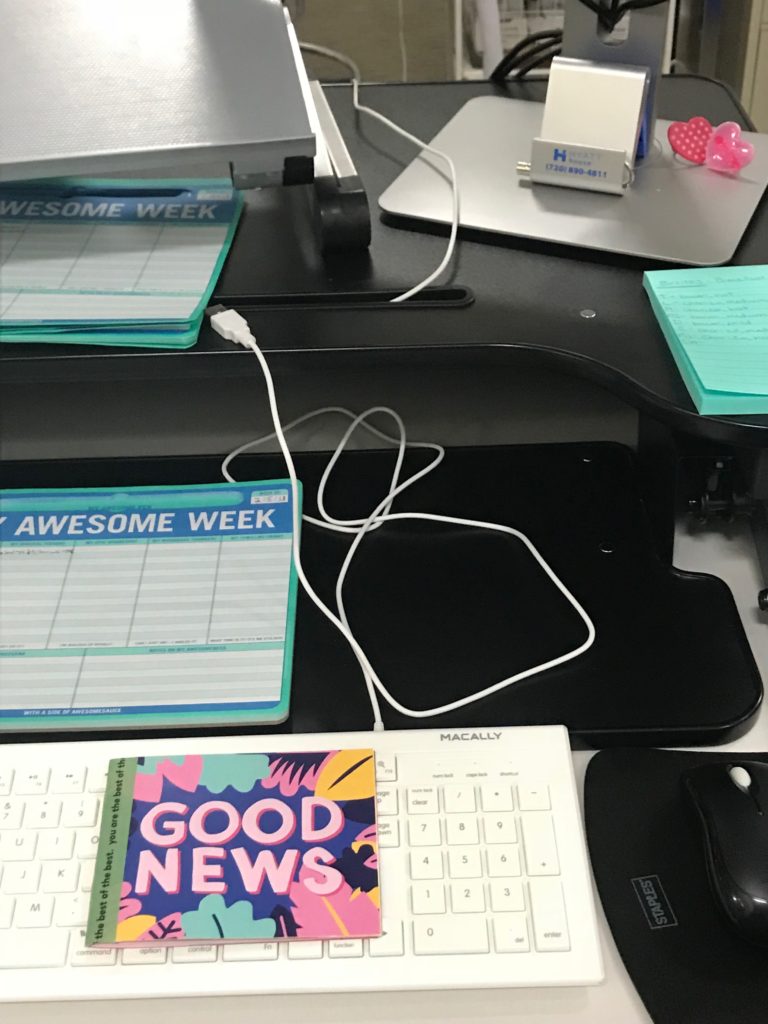 For the rest - I decided that I mostly wanted my 'zines to be pleasantly stumbled upon by unsuspecting strangers - so I handed some out and I hid a few in different spots of Boulder for people to find. 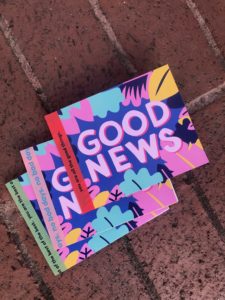 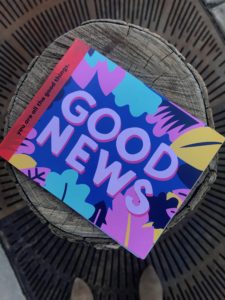 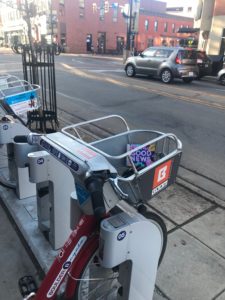 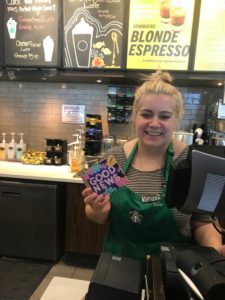 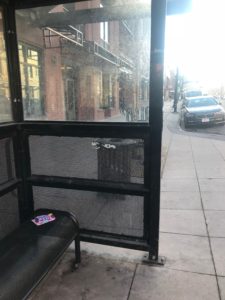 A few shots from running around town - I left a few on benches, some in the B-cycle baskets, a few in Starbucks (and handed one to the barista) and on the bus benches. In general, I wanted them to be noticeable enough for people to see the bright colors from a distance and get curious. Hopefully a few people were cheered up by the good news!

Overall I really liked working on this project - the printing costs were pretty high so I don't think this could be a regular personal project, but I was pleased with how my 'zine turned out.

Hi, this is a comment.
To delete a comment, just log in and view the post's comments. There you will have the option to edit or delete them.